Quote from the article:

“Last I checked, Jamaican wasn’t a race. It is a nationality. There are Jamaicans, Trinidadians, Guyanese, and St. Lucians who look to be descended from people from Asia, India, Africa, Europe, and Scandinavia… not all people from the Caribbean are even close to looking, acting, or sounding a certain way. Are all Jamaicans happy? No – I have met some miserable Jamaicans, Trinis, and other Caribbean people in my time, but as a whole, many are truly really content – happy even! According to a recent poll, despite economic factors, 7 of the top ten of the happiest (based on reported positive emotions of the residents) are in Latin America and the Caribbean. According to more statistics from Gallup, even though 61% of Jamaicans would say they are struggling, only 9% would say that they were suffering, and 75% are satisfied with their local schools.” 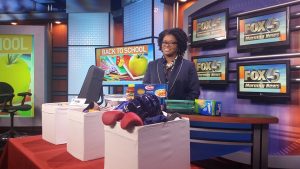 Back to School Segment on FOX 45 Baltimore