One day when I was a senior, I decided I was going to go from having hair down my back to a short straight bob.  I was so pleased with myself that I drove over to my boyfriend’s job at Hardee’s to show him.  I walked up to his counter, and he just looked at me.  Eventually he said, “Can I help you?”

He broke up with me shortly after that. That was the first time that I realized that how I looked could affect how people related to me.

It was a shock, but I got over it.  I arrived my first day at North Carolina A&T in Greensboro, NC with a pair of purplish pink shortalls from the Gap with a matching T-shirt, some tall white sport socks, sterling silver jewelry (including several herringbone necklaces) and some Birkenstock sandals. I liked it, I did it.  One day, I put on a forest green sweatshirt, some torn jean shorts, thermal underwear bottoms, white sport socks, and some brown Sebago boots.  At that point, my new college friends had had enough.  They let me know that I was at a Black school now, and that “wear what you feel” business won’t work.

At that point, I wore jeans, t-shirts, and sweatpants – for the most part – every day for the next 3 years.

Fast forward to 1999.  I had my son, and was in a “relationship” with his dad who felt like I should look Amish.  I don’t even want to describe the things I wore to keep him quiet.  It makes me cringe to think I hid that cute little body under all those awful clothes just to keep him from yapping his gums at me about my clothes.  By 2001, I had put a mattress and all of my belongings in the back of my truck and moved 600 miles away.

My new job was right next to Filene’s Basement.  I stayed thin because I spent so much time shopping that I forgot to eat.  Across the street – 9 West, Victoria’s Secret, The Gap, Express, Burberry (a girl can dream), Ann Taylor, and so many cute little boutiques!  I was on a budget, so I between food and fashion – I chose fashion.  I was back.  I was more sophisticated in my choices, and even though I had a couple of duds in the closet, the majority of my pieces were winners. One thing I didn’t touch – my hair.  I would wear wigs or weaves, but underneath it all, I had long flowing tresses that men adored.

While rocking a blur of tiny tops and flowing pants, sweet flats and stunning stilettos, I re-met and married my current husband.  I stayed cute for a while, then I got pregnant shortly after the wedding.  I was excited about getting to wear cute maternity clothes, but comfort won out, and since I spent a lot of time on bed rest, I got and remained – frumpy.  I got cute on occasion, but most of the time – sweats and some maternity jeans (that mysteriously disappeared shortly after I gave birth to my second son).

I cut my hair at least twice, but both times, it grew back VERY quickly – and I had a relaxer.

Fast forward to July of this year.  I had been playing with the idea of cutting all of my hair off, but I always had that incident with my ex from high school in the back of my mind.  I would say to myself, “I know he puts up with my attitude, my frumpy clothes, my worn out sneakers, and we have kids, a home, and a business together, but will all of that withstand a severe hair cut?”  I seriously didn’t think it could.  I had toyed with the idea of going natural for about 4 years, and one day he said to me, “if you are going to do it, just do it already.”  And I did.  I was terrified.  For as long as I could remember, I was “Eva with the long hair”.  So if I cut it, then who would I be?  I could wear what I wanted because I was “Eva with the long hair”.  My husband always remarked about how beautiful my hair was, and with my new much larger frame, I clung to that. Whenever I washed or relaxed it, he would run his fingers through it, and I could see the happiness in his eyes. He never made me feel unattractive, but I hadn’t embraced my new size – now to be bald? It just didn’t seem sensible.

I called him at work, and said I was ready.  He said we could go to Kohl’s and get some accessories to go with my new do.  He knew once I spent money, there would be no turning back.  I made this goodbye video…

Then we started cutting… 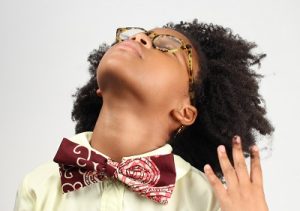 Freedom to be Curly for Little Girlies

The Neo-Naturalista Files: One Year and Three Months – Celebrating with Shea Radiance!

[VIDEO] The Big Chop: Part Two of “The Long Goodbye”