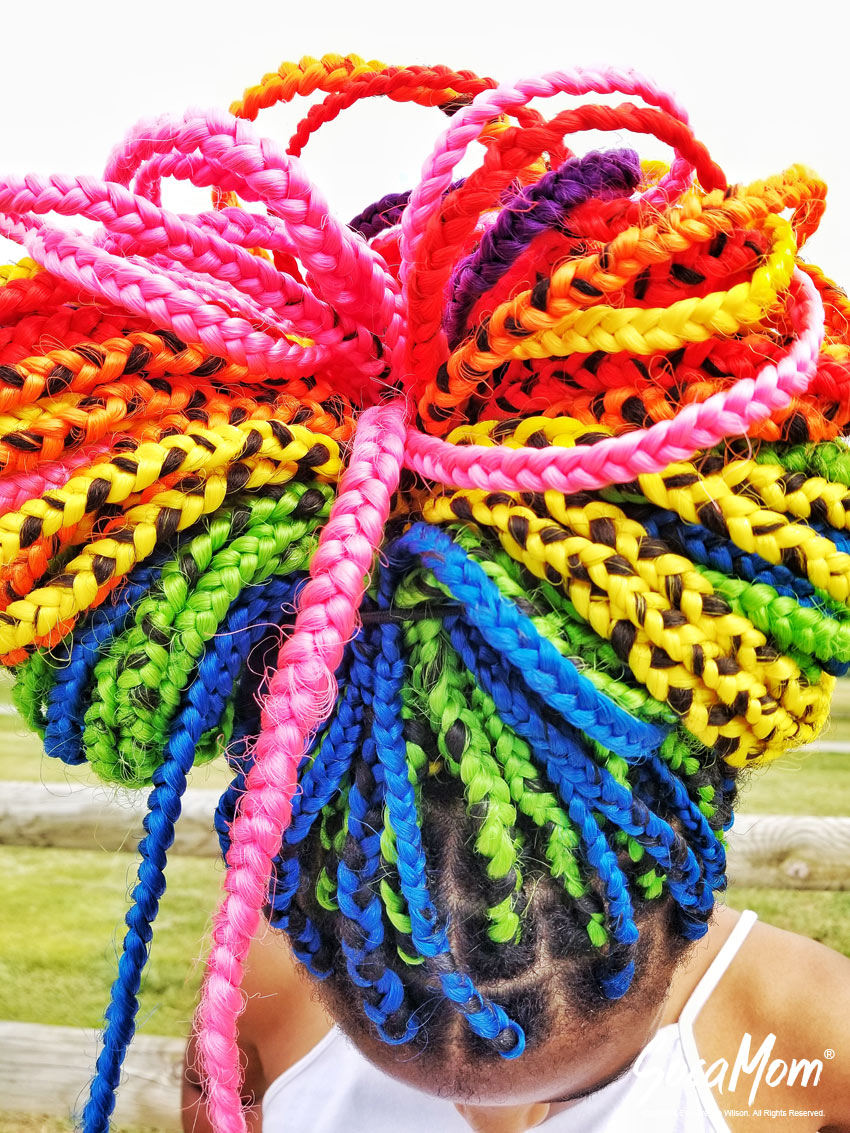 My daughter wanted hair like a magical pony. Rainbow Dash of My Little Pony to be exact.  I spent 18 hours of my life granting her wish. When it comes to hair, I have been about as conservative as they come. I was the first to judge a parent for allowing their child to dye their hair in the summer. It was mostly white boys with frosted tips that annoyed me the most. My inner Trini mom sucked her teeth and said, “is white people ting.”

There’s been a lot of chatter on social media about how black girls with colorful hair are “ghetto,” but when white girls do it, it is considered “trendy” or “creative.” Confession… colorful hair outside of entertainment, to me, until very recently, was “white people ting.”

Over the years I have relaxed my thinking about kids and hair. My oldest son has had red, blue, and green hair, a monster high top blow out, a huge afro, cornrows – pretty much whatever he wanted. 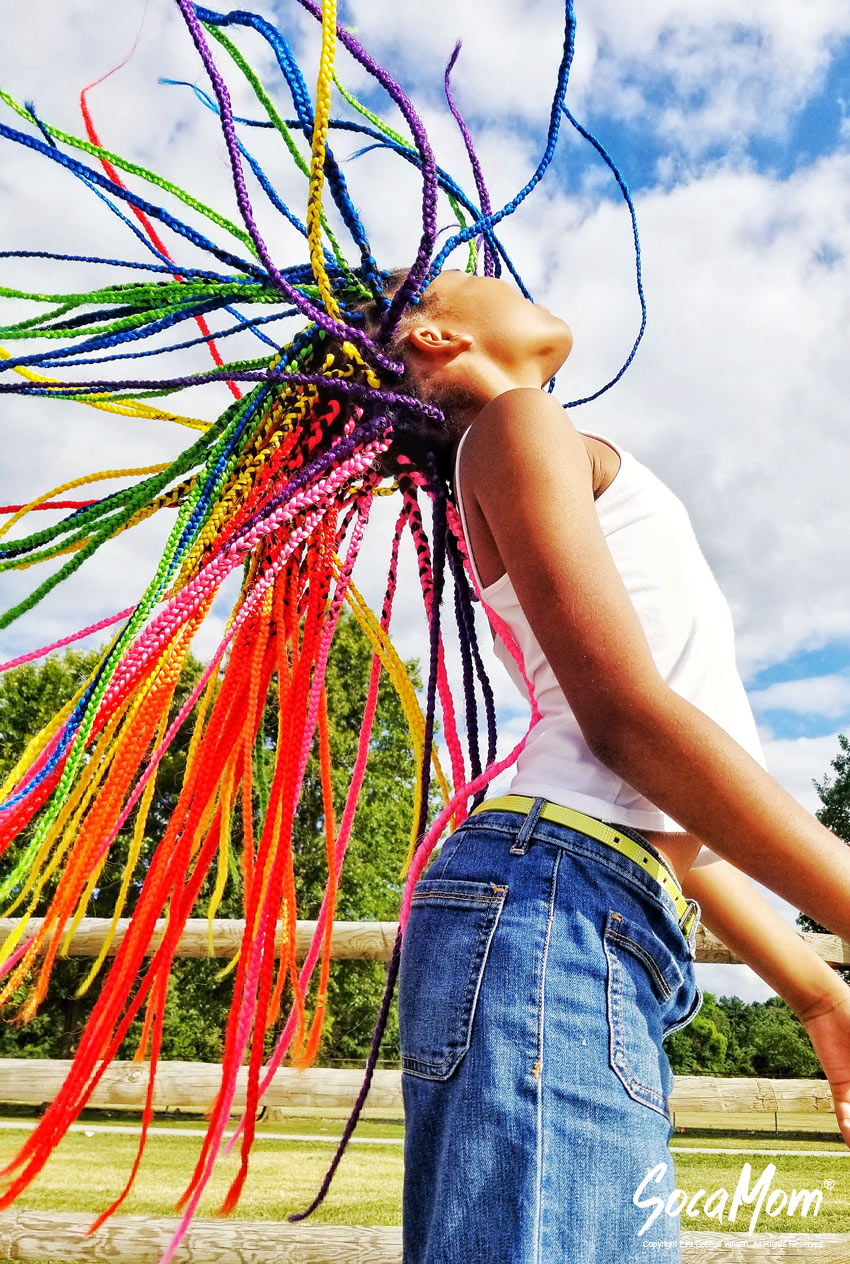 With black and brown children being forced to grow up because society (of all races) sees them as adults so much sooner than white children, I have tried to let them hold on to their youth as long as possible. 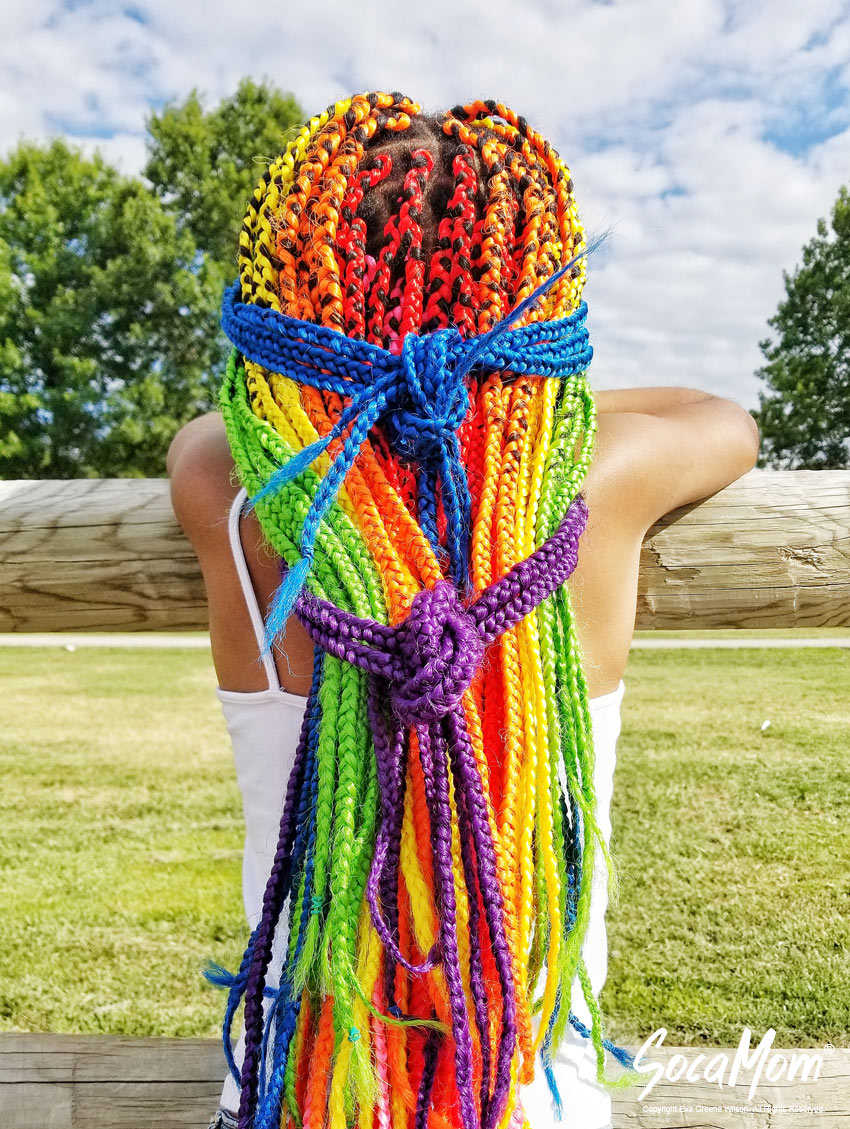 So when Li’l Bit asked me about rainbow hair, I said, “why not?”

As soon as it was time to choose what color to start with, I asked her, “so what do you think about doing the blue and purple around the hairline, so that it isn’t so… colorful around your face?”

Then I said, “ok, green next…” still thinking that I wasn’t ready for the really loud colors. 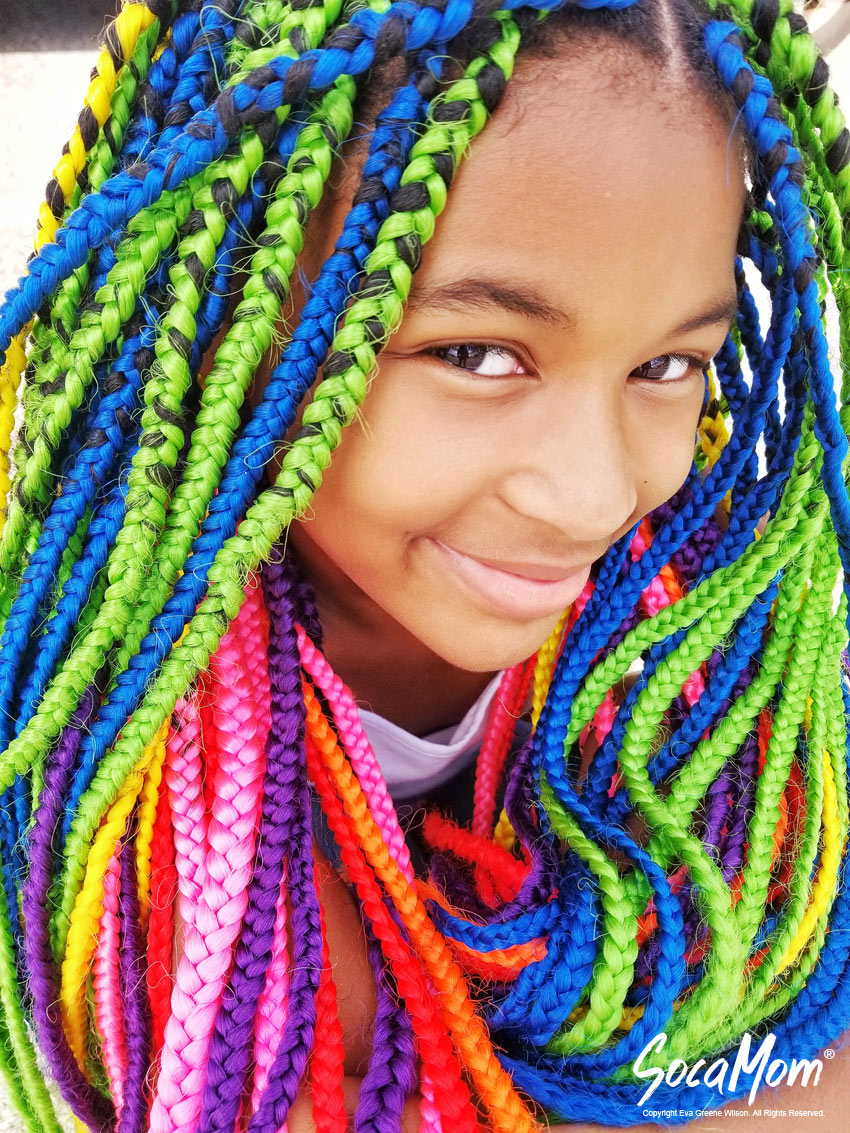 It looks crazy without the other colors? Steups.

“Why not,” she asked, flipping a blue braid out of her face.

I decided to tell her why. 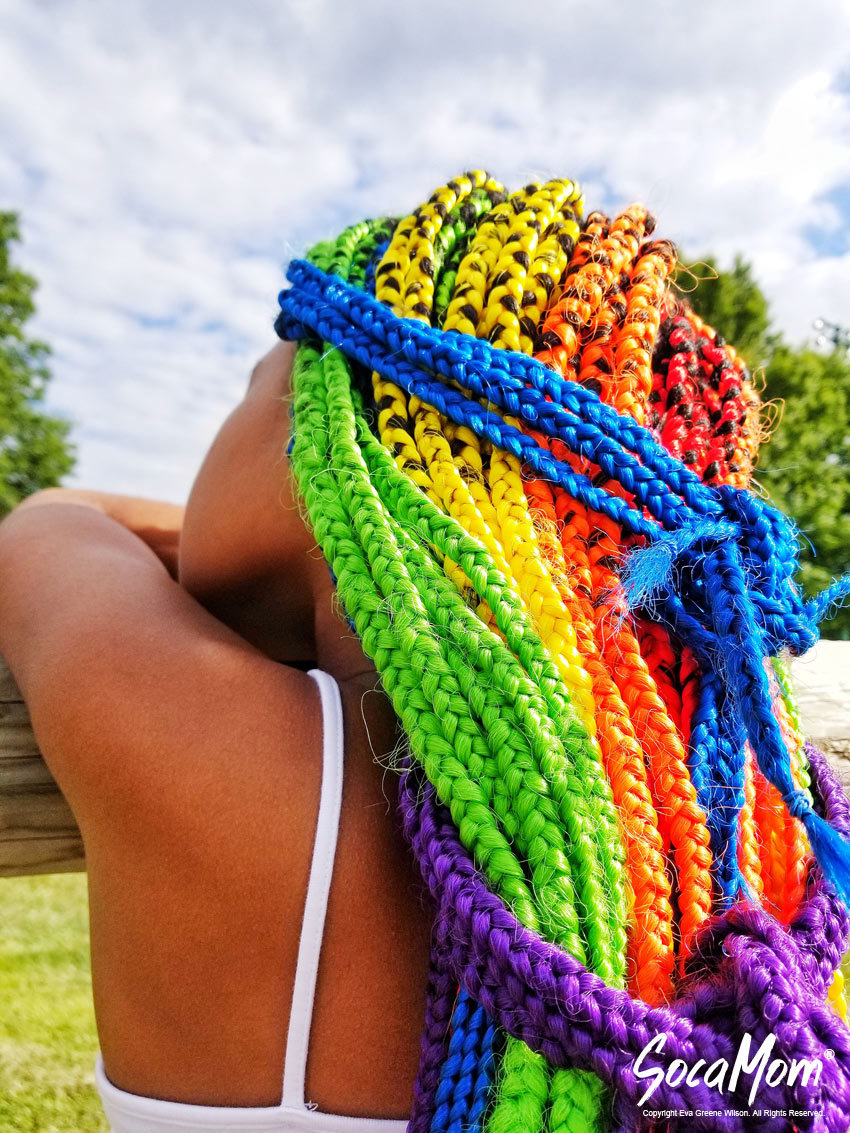 My mom wasn’t known for creative hair styling.  My hair was thick and tightly curled, and I was tender headed (for those who don’t know what that means, getting my hair done was painful for me and whoever was tasked with doing it), so for a busy physician, 4 or 5 plaits and a bow was about as good as it got.

She worked with a primarily black population in her practice, and the little girls would come into the office with these amazing, intricate hairstyles.  After the relaxer debacle of 1982, she got a lot of advice about how to get my hair to grow back and keep it healthy. She went out and bought a straightening pick, Vidal Sassoon blow-dryer with a comb, and a detangling comb and went to work on Sunday nights.

She always said no to beads, and gave some excuse… choking hazard, noisy, could put your eye out… anything to not have to figure out how to do so many small braids and thread beads on to them too.

She worked her way up to more creative styles when people started to ask her why my hair was so… uneventful.

One day, she got really creative. She blow dried it, parted it in one inch sections, put a tiny rubber band at the root, twisted the hair, put another rubber band in another color about two inches down the twist, and then repeated it until she reached the end. My hair was long, and I liked feeling it on my back. She was proud of herself, and I was proud of my hair.  When I think back on it, I see how hard it must have been to take the time to do all that, but she did it.

I walked into school happy and feeling pretty.

It didn’t take long for some little white boy to call me Medusa. We were studying mythology, and I was the only black girl in the school in Strom Thurmond’s hometown. No one defended me, no one said they thought it was pretty, there were no other black girls with hair like mine that could shoot a nasty look or help me amplify my death stare.

I didn’t have the nerve to tell my mom that I got picked on for my hair that first day. I had already told her I liked it, she was happy, and it was going to be that way for at least a week, so there was no sense in complaining.

The next week she didn’t have time to do all that, so it was back in four puffy twists. Still too many for my liking, none of those white girls had more than two ponytails at a time. Either way, the Medusa name stuck.

The next week she was up for putting in the rubber band twists again. I took a deep breath, and respectfully protested. She asked me why, and I told her about my Medusa moniker, and how mean the white boys were already. I didn’t want to put any more blood in the water.

“But the parents love it. So many of them told me so.”

When she said that I knew that the twists were going back in whether I liked it or not. Her hair styling skills had been validated, and she intended to stay on that high. This time she did the sections in triangles instead of squares. It was beautiful, and I loved it. By the time I got to school that morning, I had already prepared myself for the snickers and stares, and the white children didn’t disappoint. Once again I hated my hair.

Eventually her business grew to the point that she didn’t have time or energy to do all that to my hair, and I was thankful. She got so busy that she let me do my own hair eventually.

I’ve never really done anything out of the ordinary with my hair since.

Eden listened intently, but really didn’t have anything to say after that. She just gave the “glad that’s not my life” shrug.

Once we got to yellow I asked her, “do you think you’ll be self-conscious with these colors?”

“What does that mean?” she asked.

Eden knows a lot of words and their meanings. She studies her vocabulary lessons from her brother’s SAT prep book, how has she never learned that word?

I realized just then that she was the perfect age for rainbow hair, and I had done something right. She actually could not understand that her feelings about her hair could be affected by someone else’s feelings about her hair. Blue, green, and purple did not a rainbow make, and she wanted me to get to the “good stuff.” 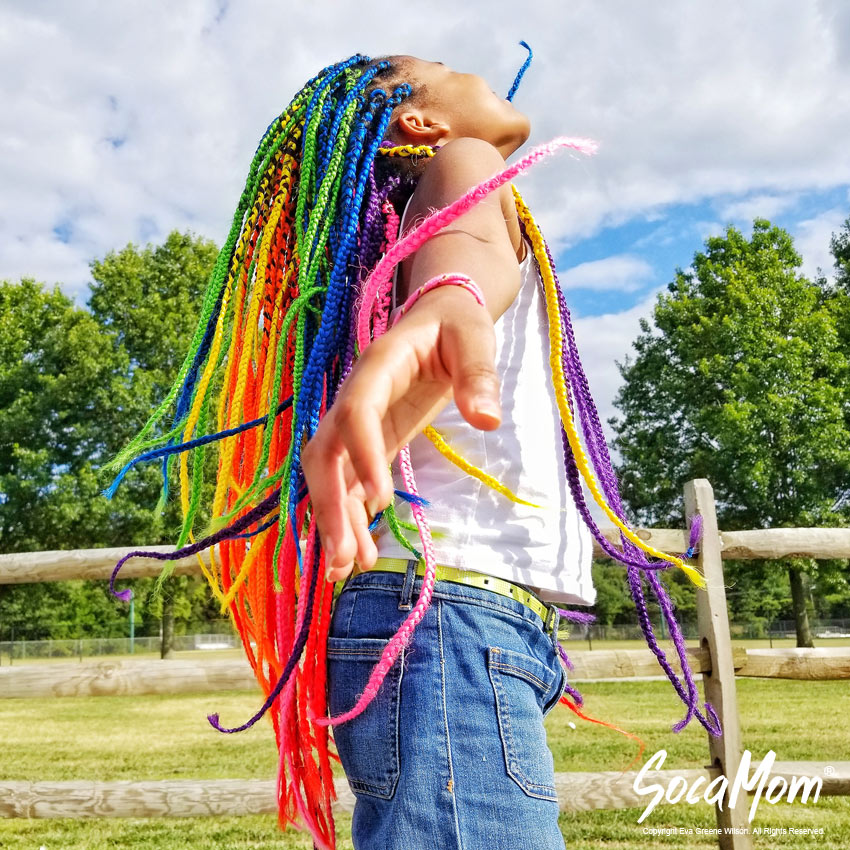 “You know, some people might not like it,” I warned as I moved on to orange, further into the wee hours of the morning, and closer to finishing my very first box braids.

“They don’t have to like it,” she replied. “I like it. Besides, every amazing thing has haters.”

I’m determined not to be that hater. As long as her hair is age appropriate, culturally sensible (she ain’t bout to be runnin round here with a blonde Elsa wig), and nothing in the styling or products could harm her, I’ll help her achieve the look she is going for. This time, it was Rainbow Dash.

So far she has been to two birthday parties, camp, and golf class – everybody loved her hair… not that she cared. She loves it, and to her, that’s all that really matters.

Would you do this with your daughter’s hair if she asked? Why or why not? What fun hairstyles have you tried on yourself or your kids for the summer or on vacation? Share in the comments – photos are welcome! 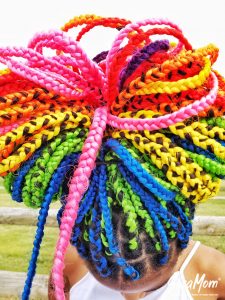 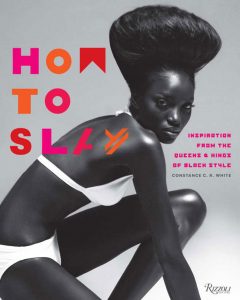 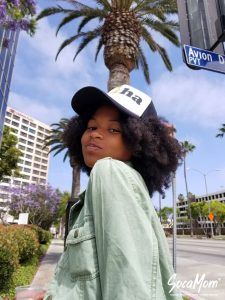