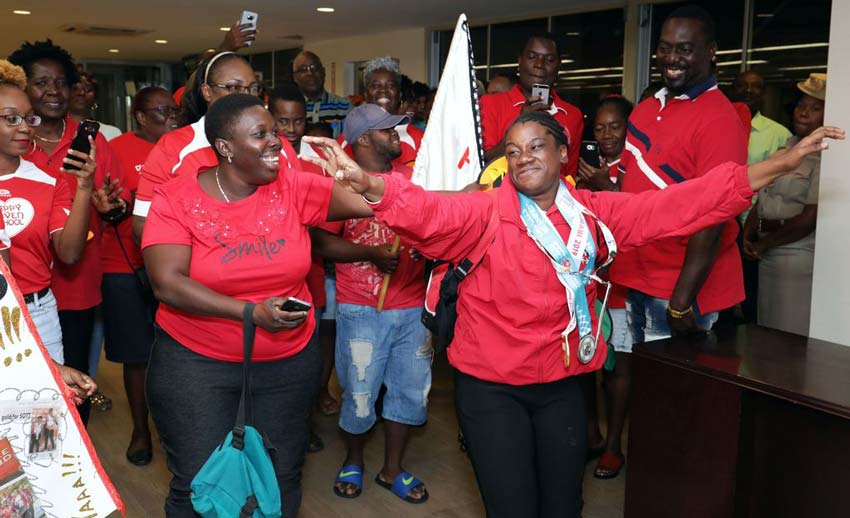 My daughter is a rhythmic gymnast and her dream is to compete in the Olympic Games. Athletes who want to be the best, watch the best. She spends hours watching athletes like Camilla Feeley, Nastasya Generalova, and Laura Zeng, trying to capture what makes them so special that they are at the top of their sport.

One evening, she ran into my room with the computer with her usual high pitched “look mommy!” Expecting to see yet another European championship routine, I made room for her and the laptop on my bed.

“Mommy! They have rhythmic gymnastics for people with special needs too! Look!” She went on to tell me that there were lots of routines online, how good they were, and how she’d love to have programs like that for everybody at her gym one day (that is her plan after she retires – to open a gym like her idol Wendy Hilliard). We watched a few videos and she trotted back to her room like she always does, to watch her rhythmic videos in peace.

When she saw that the Special Olympics World Games had rolled around, she sat with me for what seemed like hours looking for any rhythmic gymnastics videos she could find. We watched clips from track, we watched clips from soccer – volleyball, basketball, every sport you can think of – except rhythmic. Eventually we gave up, but I could tell she was disappointed. She wanted to see the best performing from all skill levels. We did go through and see who won though. Nobody from the Caribbean won any rhythmic competitions at the Special Olympics World Games. Like me, she’s always on the look out for winners from the Caribbean too.

Then, just like that, in my Facebook feed I see the lovely face of Sapphire Jackson as she’s welcomed back to Trinidad and Tobago as a gold medal winner. She was on the podium twice in Abu Dhabi – she won a silver medal too. Her welcome back to Tobago made my heart smile.

Reading about her achievements left me thinking… how well did the Caribbean athletes do at the Special Olympics World Games? We always dominate at the Olympics in various sports, so this should be no different, right? It wasn’t.

Here is my UNOFFICIAL analysis of the performance of our beloved Caribbean athletes at the Special Olympics World Games in Abu Dhabi, UAE. This is just me and a spreadsheet and my calculations, so if you see something I need to change, please let me know in the comments. I’m no statistician.

Now this is TOTALLY my own calculation, so don’t beat me up!

Did you watch the Special Olympics World Games?

This is so neat. i haven’t been following but I love to see this. They are all winners to me no matter what

This is such a great story. There are are so many lessons taught. I loved that are never gave up on what she wanted.

Wow, that’s awesome! I love seeing how all of those countries showed up and showed out!

I did not watch it this year. Look how the Carribean was represented with the number of athletes! Wow.

This is really cool. I don’t follow sports too heavy, but my husband does. I’m going to ask him what he thinks about this.

I love that you gals shared this moment together. Growing up my sister and I would climb in bed with our Mom and watch ballroom dancing. Mom and I would also watch figure skating. I’ve not watched the Special Olympics in years.

What’s a wonderful post as I never knew the Special Olympics were Global with Caribbean participants. My brother is autistic so it’s great to know that people with special needs have plenty of outlets to express themselves and participate in big games!

This is so cool. I think it is great they have this and so many countries participated.