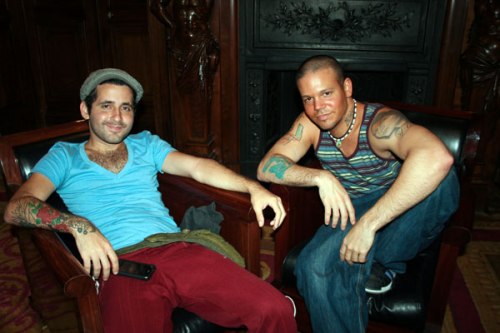 Calle 13 in recent years has transformed itself into the Hispanic voice of children, immigrants and the disadvantaged who see their experiences represented in the songs and activities of the Puerto Rican urban music genre duo, EFE reports in this article from The Latin American Herald Tribune.

Singer René “Residente” Pérez and step-brother Eduardo “Visitante” Cabra have devoted themselves to the task of engaging in social criticism in their songs.

Since they began to break out internationally with the number “Atrévete-te-te,” the group has managed to gain exposure and acceptance on the world level thanks to the message that Pérez has expressed in his songs.

Then followed songs such as “Pal Norte,” which traces the history of immigrants; “La Perla,” which speaks about the lives of residents in the disadvantaged sector of Old San Juan, where his grandmother lived.

The rapper continued spreading his messages in “Vamo’ a portarnos mal,” in which he tells people to be aware of the taboos that society imposes, but it was with the release of “Latinoamérica” that Calle 13 consolidated its massive fan base by telling about the experiences of the region since the Spanish conquest.

Since April, Pérez has been involving himself more in the struggle to reduce the U.S. “colonial” influence in Puerto Rico by meeting with assorted Latin American leaders after the Caribbean island – a U.S. commonwealth – was not included at the summit of the Community of Latin American and Caribbean States.

Puerto Rico’s status as a Free Associated State is a political framework that authorizes it to elect its own government, but it is dependent for its currency, defense, citizenship matters, foreign relations and laws on the United States.

The first meeting Pérez had was with Uruguayan President José Mujica, a former guerrilla who was imprisoned and threatened with execution during the 1973-1985 military dictatorship.

“If I have to go from president to president, I will. It was not a single country that achieved Latin America’s independence, it was many countries and many battles were fought, but they achieved it,” said Pérez at the time.

Later, during a visit to Hermosillo, Mexico, Pérez asked via Twitter for everyone attending a concert to bring a kilogram (2.2 pounds) of rice and a kilo of beans to be distributed among the poorest communities in the area.

Taking advantage of his stay in Mexico, Pérez also met with the Yo soy 132 movement to express his support for university students in demonstrating to demand that the country’s dominant media tell the truth.

Then, in July, Pérez and Cabra participated in a meeting with young people and teenagers at Madrid’s Casa América to talk about exploitation and human trafficking.

The event included a screening of the documentary entitled “Esclavos Invisibles” (Invisible Slaves), narrated by Residente and Visitante, which portrays the reality of more than 550,000 child workers in Latin America and the Caribbean.

For the original report go to http://www.laht.com/article.asp?ArticleId=582927&CategoryId=13003