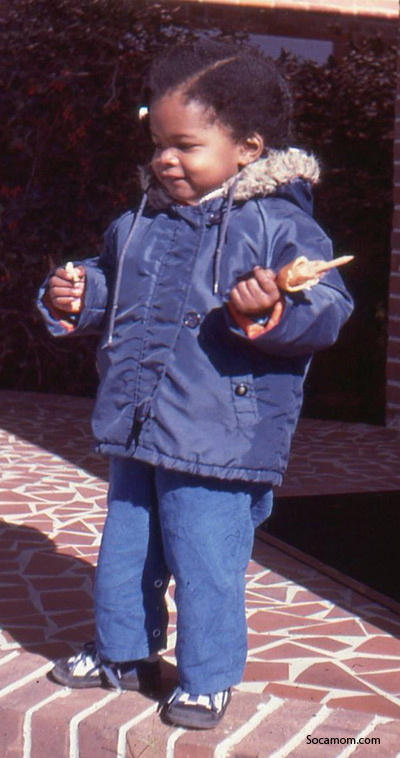 Being raised by a mom who didn’t believe in new car purchases, I never thought I would be involved with the purchase of a new car.  I wasn’t raised on “new.” My clothes for most of my childhood (including my underwear – no lie) were hand-me-downs from my older brother. I was raised to make old things new again, whether you could afford to buy it new or not.

Everything I am wearing here (likely the underwear too) is handed down from my older brother. Corndog is totally mine.

Dad and I leaning on a 77 Mercury Marquis… not sure if this was new or not. Considering my age in the photo, probably new!

My dad, on the other hand, loves new things – always did. He still gives me all his old stuff when he is ready to buy something new, and I truly appreciate it. He is a karaoke phenom in the town where I grew up, and the kids have his old equipment… they are next generation karaoke stars.

I got a glimpse of what it was like to have something new when my dad got a brand spanking new Oldsmobile Cutlass Ciera in 1985. It came fully equipped with power windows and door locks, velvety doors, and plush velvet seats, and with a bomb cassette tape that included Luther Vandross’ “Never Too Much” and Deniece Williams’ “Let’s Hear It for the Boy.” I kept those two on repeat.

Photo credit – Cars.com. You really can find anything on Cars.com. I found a car just like the one I had back in the day… for SALE!

The next car he got was a burgundy Oldsmobile Delta 88 in 1988. It was bigger, with more velvety seats and doors, and tons of leg room. I’m not sure if it came with a new car cassette or not, but it sure did come with that intoxicating new car smell, and more velvety doors and plush seats.

Photo credit – Cars.com. Seeing photos of these velvety seats and doors in the Oldsmobile Delta 88 on Cars.com really took me back…

I got my learner’s permit in “the 88” and drove it in high school and college. Of course, my dad upgraded once the car was officially mine.

How many times did you brace yourself to hear “still works” or “it fits” when you wanted something as a kid? I mean, there was never an argument to be made when it came to free. New wasn’t free. In many cases, used was.  My last car which we got last year is (drum roll please) brand new. We did a ton of research online to find the best deal, and come to find out, this car, with everything we needed cost less to buy new than it did to buy an older model of it used!  I couldn’t believe it. Sometimes new IS a better bargain than used. Who knew!

Going car shopping as a family wasn’t going to be feasible because we had been renting a little car that barely fit the five of us in it.  It was so small that when we were all in it, we had to roll down the windows so as not to fog up the dashboard because all five of us were… breathing. The breathing of five people overpowered the defogger thing. That being said, we did most of our comparison shopping online.

When we were searching, Cars.com was a great resource. We found reviews, photos, specs and more.  We felt educated, sure in our decision, and ready to face any pressure that we might face when it was time to buy. By the time we closed the laptop and got off of the couch to go pick up the car, we knew exactly what we were getting, how much it would be, and what to expect in terms of performance and maintenance in the future.

The website also has articles on how to stay safe on the road, like this one on how Cars.com conducts car seat checks for various vehicles, which includes descriptions of the brands of car seats they use for the checks.

We still live for hand-me-downs around here. My daughter loves getting clothes from her older cousins, and when I visit my dad, I always leave with one of his old gadgets to make room for gadget 2.0.

I’m not sure if I’ll get a new car the next time around, but I do know that I will be starting my search online. Getting a better deal on a new car than on a used one? Who knew? It is almost time for us to start shopping for a new car again… I’m ready!

Where do you start your new or used car search? How do you feel when you get an amazing deal? Share your experience in the comments.