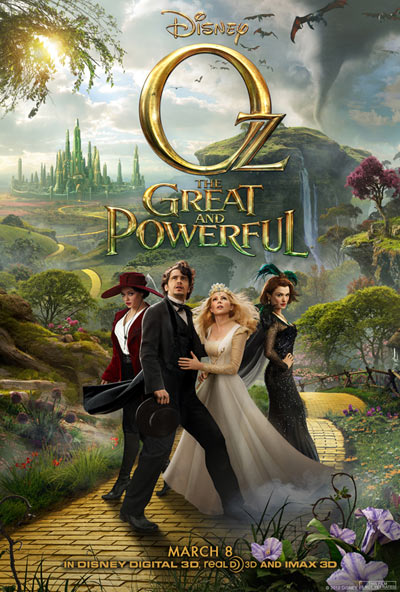 Growing up, my favorite uncle was my Uncle Ozzie. He was an artist who made album covers, and painted food realistic enough to be on menus and look like the real thing!  He was funny, and smart – creative, and hardworking – all the things I held, and still hold in the highest regard.  To me, he was magic.

Photo: Artwork by Ozwald Greene, Sr. One of my uncle’s album covers from 1983. Discogs.com

Heading up to NY to visit, I would have the song playing over and over in my head, “Weeeeee’re OFF to see the WIZARD! The Wonderful Wizard of OOOOOOOOOOOOOOOOOOOOZ! When the hubby and I went to see the screening of Oz the Great and Powerful, I couldn’t help smiling, thinking about my uncle, and how amazing he was (and still is) to me.  We sat down, 3-D glasses in hand, and I thought about what my uncle’s prequel would have been like.  I only know the story from the AFTER he got to America, like we know the story of the wizard AFTER he got to Oz.  What was he like?  What made him want to pursue a career as an artist?  What magical sights had he seen or people had he met in Tobago that inspired him to dedicate his professional life to making beautiful things?

Oz the Great and powerful is a prequel to the Wizard of Oz book by L Frank Baum, and presumably the many films, books, and even Broadway musicals based on the original story . Here is the synopsis:

Disney’s fantastical adventure “Oz The Great and Powerful,” directed by Sam Raimi, imagines the origins of L. Frank Baum’s beloved wizard character. When Oscar Diggs (James Franco), a small-time circus magician with dubious ethics, is hurled away from dusty Kansas to the vibrant Land of Oz, he thinks he’s hit the jackpot-fame and fortune are his for the taking-that is until he meets three witches, Theodora (Mila Kunis), Evanora (Rachel Weisz) and Glinda (Michelle Williams), who are not convinced he is the great wizard everyone’s been expecting. Reluctantly drawn into the epic problems facing the Land of Oz and its inhabitants, Oscar must find out who is good and who is evil before it is too late. Putting his magical arts to use through illusion, ingenuity-and even a bit of wizardry-Oscar transforms himself not only into the great and powerful wizard but into a better man as well.

I was never a HUGE fan of the 1939 movie – that’s the one that we see on TV 99% of the time.  I know some people are fanatics over it, but me – not really.  I saw the Wiz growing up, and I remember liking it for the music, but being terrified as well.  Truth is, it really is no easy story to tell without scaring somebody.  Monkeys with wings are just scary.  Witches… pretty frightening.  Having no heart, no brain, and no courage? Terrifying.

This story starts at what is presumed to be just before the reign of the wizard of Oz that we all know about from books and movies, and what happened to make him the Wizard.  The previews sold me on the special effects, and from the time I put on those 3-D glasses, I was pretty impressed. There were some slow parts, and again, I don’t love stories of witches and the like.  If you are looking for action? Check. Drama? Check. Child friendly fun film? Wait.

These days, if there’s a lesson in a film, that’s a bonus – and probably not the intention of the film makers.  There is a lesson in here somewhere (I think), but one of my takeaways was that a womanizing man can make an otherwise awesome woman into a real… well… witch.  I won’t spoil it for you, so here’s my rundown:

Did it earn the PG rating? Yep.  Sure did.  Even I jumped a little at some of the action scenes, and no matter how you slice it – witches are scary.  You also have some pretty provocative costumes on the witches – heaving bosoms and pleather hot pants aside, it wasn’t so bad.

Bottom line, should you go see it? If you are a fan of the Wizard of Oz movie from the 1930’s and the book, you may find some really interesting additions that were made in Oz the Great and Powerful (from the book) that were omitted from the well known screen adaptation.  The special effects, graphics, and color are all amazing, and the action scenes can get your blood pumping a little.

Should I take the kids to see it? As usual, depends on your kid.  I wouldn’t simply because I don’t like some of the things that are implied.  I am pretty tired of the fair eyed, fair haired, “princessy” female character being portrayed as good, while the dark haired, dark eyed, more olive toned female character is portrayed as bad.  It gets old, and I think that it shows a lack of creativity to use just white clothes, blonde hair, and a light weak voice to show that someone is good, and dark clothes, dark hair, and a stronger voice to show that someone is bad.  I don’t know about anyone else’s kids, but my kids are smarter than that.

I also don’t like the idea of a man just using simple tricks to woo women – like it doesn’t take much and that women are stupid.  Sure as an adult, I can sift through the mess to get to the entertainment, but kids are highly susceptible to suggestion. With all the amazing special effects and that suggestion is pretty powerful in a movie like this.  My little one’s won’t be seeing this one.  The witches and special effects aren’t too much for them, but I don’t see where it will really add anything to their minds in that two hours that would be better than us reading together, playing outside, riding bikes, or visiting a museum. I’d take the oldest if he asked, and I had time – but I know that he’ll miss half the dialogue when Mila Kunis appears in those skin tight shiny pants – that can be distracting for a teenage boy.

More about the movie:

When small-time magician Oscar Diggs (James Franco) pulls one flimflam too many, he finds himself hurled into the fantastical Land of Oz where he must somehow transform himself into the great and powerful wizard-and just maybe into a better man as well. “Oz The Great and Powerful” is produced by Joe Roth, with a screenplay by Mitchell Kapner and David Lindsay-Abaire. Grant Curtis, Palak Patel, Philip Steuer and Josh Donen are serving as executive producers. “Oz The Great and Powerful” opens in U.S. theaters on March 8, 2013.

Disclosure: My husband and I were given passes to see this movie for the purpose of writing a review. As always, my opinions are my own. For more information click on “About”.