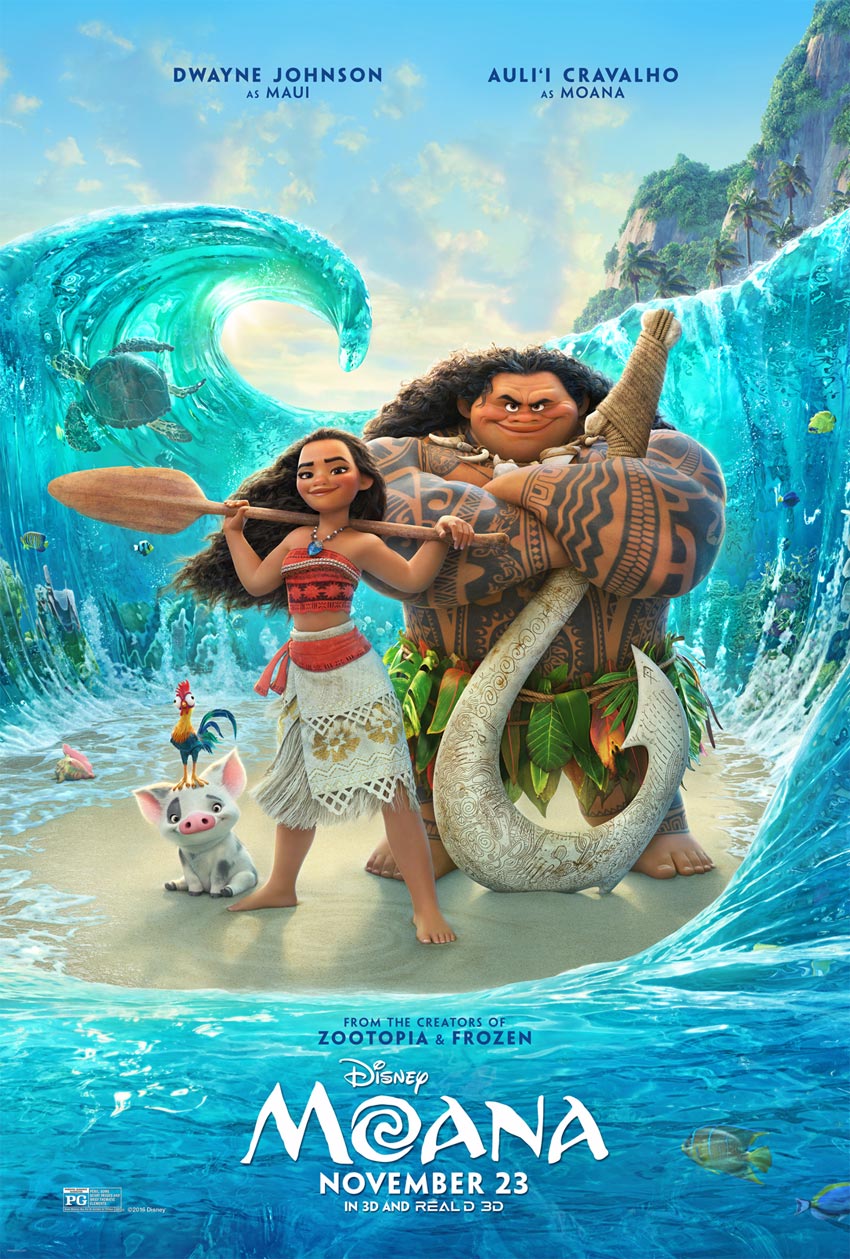 Just before I left for Alliouagana Festival of the Word in Montserrat, and the holiday season got into full swing, I took my two youngest to check out a pre-screening of Disney’s Moana.  I was planning my trip to a volcanic island in the Caribbean that looks much like the islands depicted in the movie, and already missing the my kids. I really don’t like traveling without them.

The kids were pretty excited about seeing the movie.  My oldest was too, until he found out he had soccer practice at the same time… he tried to mask his disappointment as I dropped him off and headed to the theater.

I liked the animation.  It seemed like the water had a mind of its own.  The movie was suspenseful, and the plot was really good.  I didn’t end up bored at all and the characters were very interesting. I liked the way that Moana was adventurous and I’d probably do the same thing that she did in the movie.  I felt like it was probably historically accurate.  I haven’t studied Polynesia or anything, but it didn’t seem racist at all.  The movie was really hilarious, and I liked the chicken and the pig.  (Check out this coloring page – Moana: Color Pua and Heihei)  I would definitely recommend this movie to all my friends… everyone from like one month to like a bajillion months (I think she means it is great for all ages).

I wasn’t sure what they’d think because anytime people mention “gods” they get a little funny about it, but they left singing.

Here’s what Mr. Social had to say about the film:

My favorite thing about the movie was Maui’s ego, because it reminds me of my older brother (Check out this coloring page – Moana: Color Maui). When I heard the song, ‘You’re Welcome, I thought that it sounded a lot like a song that my brother would sing when he’s flexing in the mirror.  The grandma was nothing like either of mine.  I didn’t think the movie was that scary, but there were parts that made me jump.  The music reminded me of the music in Frozen. My sister and I were singing the songs all the way home.  I hope that my parents will get it once it comes out on DVD, or download it or something. I want to watch it again, and I think my brother and my dad should see it too.

I think my oldest would have been impressed by the level of detail.  He loves to draw and is planning to study art when he goes to college next fall.

I really liked seeing the relationship between Moana and her grandmother, I think that grandparents watching this with their kids would be able to relate.

Did it earn the PG rating?

I think it did, my heart jumped a couple of times, so if your child is very sensitive, or not well versed in the story arc of most Disney movies, they may be a little frightened.  For the most part, it was mild.  Not that violent or scary.  There’s a lot of water action, so if your or your child has fears of water or the ocean, you might feel some kinda way about this one.  Also, if you have a kid who is defiant or wanders? This movie could reinforce those unpleasant habits.  In most Disney movies, the protagonist has to defy a parent or guardian to reach their full potential and “find out who they really are.” This movie isn’t any different in that respect.

“Moana is the 16-year-old daughter of the chief of Motunui,” says director Ron Clements. “She’s brave, determined, compassionate and incredibly smart. She has a never-say-die attitude and a profound connection on to the ocean.” “So it’s troubling to her, to say the least, that her people don’t go beyond the reef surrounding their island,” adds director John Musker. “They stay within the confines of that reef, and Moana doesn’t really understand why, especially since she’s felt drawn to the ocean her whole life.”

Bottom line, should you take the kids to go see it?

I would say yes.  I enjoyed the cultural aspects of it, and was pleased to see that so much research went into making sure that the movie was as accurate as possible, right down to the actors chosen to voice the characters.

The story is inspired in part by oral histories of the people and cultures of Oceania, where filmmakers traveled to learn as much as possible. For centuries, the greatest navigators in the world masterfully navigated the vast Pacific, discovering the many islands of Oceania. But then, around 3,000 years ago, their voyages stopped for a millennium – and though there are theories, no one knows exactly why. “Navigation or—wayfinding—is such a big part of Pacific culture,” says Musker. “Ancient Polynesians found their way across the seas, wayfi nding island-to-island without the use of modern instruments, using their knowledge of nature, the stars, the waves and the currents.”

I think that it will inspire kids to learn more about the culture, and maybe even make families consider visiting the region to see it for themselves.  I have a real affinity for water and the ocean, so I loved seeing the blue expanse.  I also know the power of the ocean, which also almost took me out when I was 16 at a secluded beach in Trinidad, so I felt it when the ocean took on a life of its own.

I went to Hawaii when I was about 12, and we did all of the super touristy things.  The filmmakers tried to stay away from those aspects of what we think we know about Polynesia, and it showed in the final film.

They were invited to take to the seas a couple days later with talking chief and expert seafarer Jiujiua “Angel” Bera, who taught them about Fijians’ relationship with the sea. “He told us that we must ‘speak gently to the ocean,’” says Clements. “The ocean is viewed as a living, breathing, powerful entity. There is immense respect and admiration for the ocean in this part of the world. We sailed aboard a camakau, which is a traditional Fijian sailing vessel.” The team was invited to explore Fiji’s Sigatoka Sand Dunes National Park with local archaeologists, where they saw shards of Lapita pottery scattered across the beaches. Many of the artifacts uncovered at Sigatoka are housed in the Fiji Museum. The group also watched the Oceania Dance Theatre Troupe, drove out to the Bourewa archaeological site and shared more kava in Vusama, a traditional Fijian village.

A lot of effort went into making this film not only visually beautiful, per Disney’s usual, but also culturally and historically accurate. I appreciate that effort, and I believe your family will as well.

AND THE MUSIC!  How could I forget about the music.

The diverse and dynamic team behind the film’s inspired music includes Tony®-, Emmy®- and Grammy®-winning lyricist/composer Lin-Manuel Miranda, who counts among his credits Broadway’s Pulitzer Prize-winning and multiple Tony-winning “Hamilton” and the Tony-winning “In the Heights.” Miranda is also a 2015 MacArthur Foundation Award recipient. “I really related to Moana in a lot of ways,” says Miranda, who was “transported” by the Clement-Musker-helmed feature “The Little Mermaid” at age 9. “She has a family that she loves, an island that she loves, but there’s a voice inside that’s calling. The idea of quieting life enough so that you can hear that inner voice was something really worth writing about for me because I think it’s so important.”

Three-time Grammy®-winning composer Mark Mancina created memorable scores for films like “Speed,” “Tarzan” and the Oscar®-winning “Training Day,” and also co-wrote songs, produced and arranged the score for Broadway’s musical production of “The Lion King.” According to Mancina, the music is designed to propel the story. “Music is like a gigantic magnifying glass when it comes to the emotion of a story,” says Mancina. “It can enhance it; it can manipulate the story—you have to be very careful. I like to leave a theater with those tunes 24 in my head. And if I still have them in there the next day, I’m really happy.”

Opetaia Foa‘i, the founder and lead singer of Te Vaka, is a winner of numerous world music awards, including the Senior Pacific Artist award for his contribution to Pacific music. “For more than 20 years, I’ve been touring the world telling stories of our ancestors, who were the best navigators the world has ever seen,” says Foa‘i. “When I first learned that ‘Moana’ was about voyaging, I thought ‘when you dream upon a star.’ Everything really aligned with my purpose of sharing this awesome culture.”

ABOUT THE MOVIE: Three thousand years ago, the greatest sailors in the world voyaged across the vast Pacific, discovering the many islands of Oceania. But then, for a millennium, their voyages stopped – and no one knows why. From Walt Disney Animation Studios comes “Moana,” a sweeping, CG-animated feature film about an adventurous teenager who sails out on a daring mission to save her people. During her journey, Moana (voice of Auliʻi Cravalho) meets the mighty demigod Maui (voice of Dwayne Johnson), who guides her in her quest to become a master wayfinder. Together, they sail across the open ocean on an action-packed voyage, encountering enormous monsters and impossible odds, and along the way, Moana fulfills the ancient quest of her ancestors and discovers the one thing she’s always sought: her own identity. Directed by the renowned filmmaking team of Ron Clements and John Musker (“The Little Mermaid,” “Aladdin,” “The Princess & the Frog”) and produced by Osnat Shurer (“Lifted,” “One Man Band”), “Moana” sails into U.S. theaters on Nov. 23, 2016. ~ Walt Disney Pictures

Disclaimer: My family and I were given passes to a pre-screening of Disney’s Moana in order to write this review. We even bought our own snacks… As usual all opinions are my own.