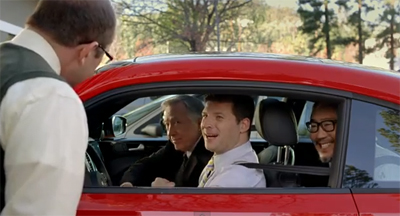 Which one of these guys is Jamaican? What does it MEAN to be Jamaican, and how could this commercial be deemed “racist”?  Who on earth came up with that one?  Okay, so the veggie eaters were mad about the Taco Bell commercial that bashed veggies (Wait – don’t tacos have veggies?), and they pulled it. Absurd.  But apparently everyone BUT Jamaicans were upset at the Volkswagen commercial? And just a second… who says that the white guy from Minnesota can’t be Jamaican?  Let’s ask this guy…

Last I checked, Jamaican wasn’t a race.  It is a nationality.  There are Jamaicans, Trinidadians, Guyanese, and St. Lucians who look to be descended from people from Asia, India, Africa, Europe, and Scandinavia… not all people from the Caribbean are even close to looking, acting, or sounding a certain way.  Are all Jamaicans happy? No – I have met some miserable Jamaicans, Trinis, and other Caribbean people in my time, but as a whole, many are truly really content – happy even!  According to a recent poll, despite economic factors, 7 of the top ten of the happiest (based on reported positive emotions of the residents) are in Latin America and the Caribbean.  According to more statistics from Gallup, even though 61% of Jamaicans would say they are struggling, only 9% would say that they were suffering, and 75% are satisfied with their local schools.  Countries like the United States and Singapore were on the low side when it came to happiness because many were stressed at working so much with little time to relax or spend time with family – something that is highly valued in Caribbean and Latin American culture.  So what better place to say, “get happy” in a over the top Jamaican accent than the American workplace?  I can’t think of one…

Seems that this commercial makes perfect sense to me.

Update: The general consensus on Facebook and Twitter is that folks just need to lighten up.  The post was featured on BlogHer.com in News and Politics – Race and Ethnicity, as well as on their Facebook Page check out the comments there and see if you agree.

I received an email from Dr. Claire Nelson, founder and president of the Institute of Caribbean Studies, fierce advocate for the representation of Caribbean people in the Caribbean and here in the United States with a press release from ICS and CHO (the Caribbean Heritage Organization). Here’s what they had to say in support of the ad:

There has been recent criticisms of a preview ad being aired by Volkswagen of America for the 2013 Super Bowl. In response to the recent media brouhaha over the VW ad and allegations that the commercial is racist, the following is a statement from Dr. Claire Nelson, architect of the campaign to designate June as National Caribbean-American Heritage Month. This is the official position of ICS and the Caribbean Heritage Organization (CHO). ICS and CHO commend Volkswagen and its ad agency for its recognition of the global impact of Jamaican culture, through its use of a Jamaican accent in its Get In. Get Happy Campaign! “As members of the Caribbean diaspora, and Jamaican, we find the commercial, amusing and indeed a fascinating example of subtlety in subliminal messaging. In one fell swoop, the ad directors have superimposed Jamaicans’ reputation for being hardworking (the three jobs archetype) as well as our reputation for having a laid-back, positive, don’t-worry-about-a-thing disposition through the character of the Volkswagen. And yes, the accent in the commercial is not perfect, but it certainly is recognizable. What we DO find problematic and bordering on offensive are the mostly non-Jamaican critics, who contend that the commercial is racist, with some going as far as saying that it’s like putting a Black face on a White or Asian person. We hasten to assure the viewing public, that being Jamaican, just like being American, is a nationality and not a race.

Any one of the actors featured in the commercial could be a native Jamaican. Yes, most Jamaicans are of African ancestry (that is to say Black), but Jamaica also is home to a significant mixed-race and diverse racial population. Jamaicans are East Indian, Chinese, Middle Eastern and European (that is to say White). A true reflection of the Jamaican National Motto, ‘Out of Many One People.’ As Chair of the National Caribbean-American Heritage Month commemorative celebrations in June, ICS congratulates Deutsch LA and Volkswagen on recognizing the Caribbean impact on American culture and making this a teachable moment to educate America and the rest of the world on the history and culture of Jamaica and the rest of the Caribbean.

We invite everyone to “Get In and Get Happy. No Problem, Man!”

WHAT YOU CAN DO: Tweet your support for the VW ad with the hastag #ICS #GetInGetHappy

Here is the commercial – enjoy!

How do you feel about the commercial?  Do you feel offended by it?  Connected to it?  Smiling or frowning?