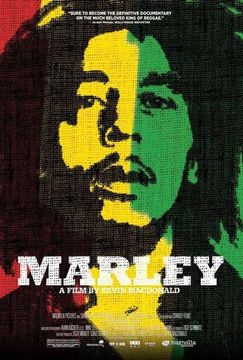 Last night, the Socamom.com Meetup Group for Washington, DC met at the E Street Cinema (very cool date spot by the way) to watch “Marley,” an epic biography of the life of iconic reggae singer Bob Marley.  I have to admit that the first I heard of Bob Marley’s music was at an all white summer camp (there were two African American people there – myself and one other) in the mid 80’s when I was about 13.  The racial background of his early fans in the United States is discussed in the movie, and how I learned about him occurred to me as I watched.  I lived in a household where the Caribbean music that was played was Calypso like Shadow, Sparrow, Kitchener… when soca became popular, we had plenty of that, but reggae wasn’t a household music staple.

First – if you are in your mid thirties, and you are feeling like you haven’t accomplished enough, this movie won’t make you feel any better about that.  He was able to do more for his family, his country, and the planet before his death at 36 than most of us can even dream about.  This beautiful documentary follows Bob Marley’s poor upbringing and stellar career through the eyes and stories of those who knew him best.  Mom, wife, kids, girlfriends, co-workers, producers, family, and friends all contribute stories.  Interviews with Bob Marley himself sheds light on the meanings of the lyrics of many of his songs, and shows the impact that music can have on people, nations, and the world.

It is definitely a “must see”.  You can take children, but definitely 13 and over – many marijuana references, images, etc.  No overtly sexual material or images.  It is rated PG-13 (probably because of marijuana references), and for those of you with older children, with later bedtimes, this may be a good time to get out with your tweens and/or teens and introduce them to a Caribbean icon (if you feel the subject matter is appropriate).  Check the website for showtimes: http://www.bobmarley.com/marley_the_movie.php | Facebook: https://www.facebook.com/BobMarley | Twitter: https://twitter.com/bobmarley

Here is the trailer if you haven’t seen it yet…

Here’s some more information about the movie:

Kevin Macdonald’s biopic is a must see for fans and educational for those who aren’t old enough to remember his career. The singer’s life has been widely reported and scrutinised but this documentary meets the people that influenced him as a person and his music.

The documentary is also a musical journey, explaining the development of reggae and the sub-culture is created and the elements that make a track reggae in the first place. The lyrics in the songs add to the tale and are explained, analysed, played back to relatives to garner their reaction of their new found fresh perspective.

Oscar winning director Kevin Macdonald manages to put Bob’s family and friends at ease coaxing out eccentric personalities and charming witty tales while fully capturing all the quirkiness of them as individuals and their surroundings. He even tracks down Bob’s first music teacher who remembers the first song she taught him. The testimony follows the reggae artist through marriage, affairs, children (eleven known descendants from seven different women), politics, exile and finally cancer. Macdonald uses a wide variety of archive imagery and footage of Marley’s life and filmed as far afield as Ghana, Japan, the UK as well as the US and Marley’s home in Jamaica.