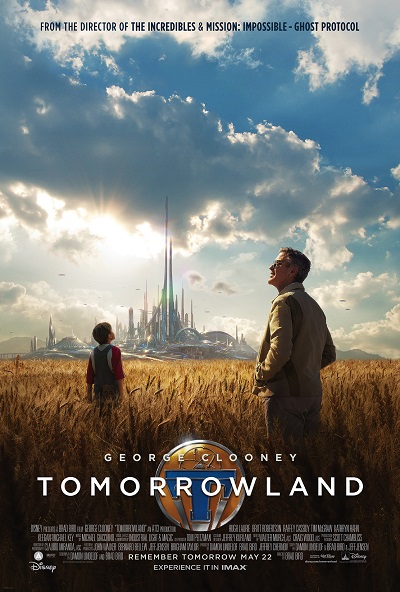 I honestly walked into this movie with no idea what to expect. With all of the extended trailers and spoilers for movies out there these days, that isn’t something that happens very often.  The marketing team for this film did a great job of making you want to see the film without having a real idea of what it was actually about. Tomorrowland is one of those films that is easy to give spoilers for, even if you don’t intend to.  If someone asked me what the movie was about, I’d have to really work not to give all the best part away.  I was going to get my kids to participate in this review, but they don’t really get that they can’t give away every single detail of the film.  They were so excited about it, I am pretty sure that anything they came up with would be a real spoiler.

There’s only a few things that I can tell you without ruining it for you. First, George Clooney was fun to watch!  No matter what you may thing of how long he held onto his bachelor status, he is really an incredible actor.  The young people in the film did an amazing job as well.  I remember thinking that it really is a skill to be so young and able to emote so that it comes off believable on screen.  The special effects? Top Notch.  Remember all those people who were experiencing depression after watching Avatar because they couldn’t actually go to Pandora?  This glimpse of the future that we see in Tomorrowland could very well bring up those same feelings. You want to go there and be a part of it.  Okay – no more – I’m on the edge of giving it all away. What I can tell you is this.  This film is about the past, the present, and a pretty awesome future (For the most part? This is an easy movie to give spoilers for – ugh!) and it will leave you hopeful, inspired, motivated, and ready for the days and years ahead.

From Disney comes two-time Oscar® winner Brad Bird’s “Tomorrowland,” a riveting mystery adventure starring Academy Award® winner George Clooney. Bound by a shared destiny, former boy-genius Frank (Clooney), jaded by disillusionment, and Casey (Britt Robertson), a bright, optimistic teen bursting with scientific curiosity, embark on a danger-filled mission to unearth the secrets of an enigmatic place somewhere in time and space known only as “Tomorrowland.” What they must do there changes the world—and them—forever. “Tomorrowland” promises to take audiences on a thrill ride of nonstop adventures through new dimensions that have only been dreamed of. ~ Walt Disney Pictures

My 9 year old said loved the architecture in the film.  My 10 year old was mesmerized by the different modes of transportation in the movie, of course, and the 15 year old, who enjoys writing, said that he noticed how well written the dialogue was.  The kids chattered about the movie all the way home until they fell asleep one by one.  You would think they were part of the action in the film.

Ready to check it out? It opens nationwide today, May 22nd – after you see it, come back and let me know what you thought…

Did it earn the PG Rating? Definitely.  There’s a lot of action, and there’s actual killing… of actual people. The language isn’t more intense than your kids might hear at a multigenerational family event, so don’t worry – your little sweetheart won’t come out of the movie cussing like a sailor.  I think it is fine for about 8 and up. Not because of the violence, and there were no sexual situations, but it isn’t the easiest movie for a little kid to follow and appreciate what’s going on. There’s plenty of special effects to keep them watching, but don’t expect really young kids to be able to tell you exactly what the movie was about.

Bottom line. Should you go see it? Yes! The themes are those that adults would be very much concerned with, and the action scenes are amazing.  You really should see it in IMAX.  This was my first IMAX movie, and it literally was like watching the movie in 3D, but without the glasses.

Should I take the kids to see it? Yes! My children had a blast, the contest winners had a ball, and the moms from the SocaMom DC area meetup enjoyed it as well.  Kids who don’t like loud noises, are easily frightened, or are especially sensitive to death scenes  should probably steer clear. Average kid, over 8? Go for it. Here are some fun activity pages that they can check out based on the movie –

Disclosure: I was given passes for my family, meetup group members, and contest winners.  As always my opinions are my own.