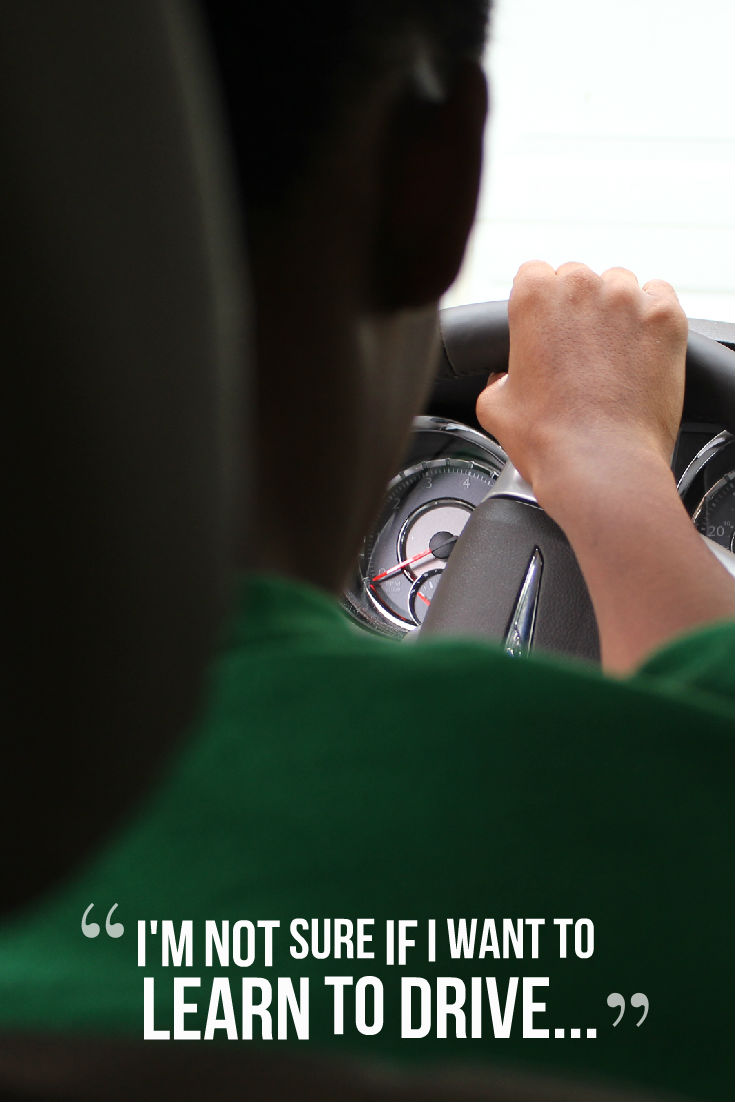 This isn’t the way that I planned for this to go. I just knew that when my son turned 16, he would be in a rush to drive, and I would be putting the brakes on any discussions related to him getting behind the wheel.  He knew that I had my permit in South Carolina at 14, and was driving all by my lonesome at 15. I was certain that he would use this information against me to speed the process when it came to getting his driver’s license, even if that was back in the stone ages.  I am pretty sure that he thinks that I drove a stone car with my feet like the family in that famous pre-historic cartoon.

DC law allows teens to drive their siblings around, but not unrelated passengers, for a period of time, and the closer he got to 16, the more I looked forward to him getting a license so that he could eventually help us out with getting the kids to all of their activities. He plays soccer, his brother takes karate and runs track, and his sister has ballet lessons.  We have tried to be in 10 places at once, and it rarely, if ever, works out.

As his 16th birthday got closer, he wanted to talk less and less about learning to drive, and more about the different metro routes that could get him where he needed to go. I told him that I had downloaded the driver’s manual from the DMV website for him – he was less than enthused.  I couldn’t understand it. With a driver’s license comes freedom.  I had a talk with him to find out why he wasn’t as eager to drive as we expected, and I found out that he was terrified of becoming a teen driver statistic.

Apparently, my son had done some reading, and watched more than a few crash videos on YouTube and had become well aware of the risks to teen drivers, including the following facts:

Number. One. Killer. Of. Teens. That is all that he needed to know to decide that driving just wasn’t for him.  Sure he’d sit in the driver’s seat while I went into the grocery store and listen to the radio, but as soon as I approach the car, he’s back in the passenger seat with his seatbelt securely fastened.

I wasn’t sure how to make him feel more safe and confident in his ability to drive, so when SheSavvy and The National Safety Council asked me to write this sponsored post about Global Youth Safety Month, and share the resources with you and my teen, I was more than happy to do so. I started with these fantastic posters to let him know that there are a few rules that he can follow to reduce his risk while he’s still learning. You can download the PDF’s of these posters and more here.

We watched videos… lots and lots of videos… and he started to come around. But then we started reading more, and come to find out – it isn’t all on him – it’s on us as parents as well:

Luckily, our vehicle has a great hands free bluetooth feature that allows me to keep my hands on the wheel and my eyes on the road. It makes it so much easier to teach by example.

We found even more resources at DriveitHOME.org and I think that he is finally ready to consider getting his permit. While I am sure that a part of that is that he wants to help out the family, I think it is also influenced by the fact that many of his friends are already driving, the place he chooses for college may not have a sophisticated transportation system, and that some of the weirdest things happen on the train and bus in metropolitan areas. Now that he knows that he can reduce his risk of having an accident by following certain best practices as a teen driver, he is even more comfortable with the idea of becoming a driver.

The rules in our house are probably more strict than most when it comes to chores, school work, and manners, and that won’t be any different when it comes to driving. As parents, we are encouraged to stay involved with our teen’s driving experience, even after they get their license, practice with them, and set rules in our house that are stronger than the DC’s laws for teen drivers. For once, I think my teen will be thankful for strict rules because he knows that we only want to keep him safe… something that he’d definitely like to be on the road. Parents you can find more resources to help you educate you teen drivers here.

This is a sponsored post. I was compensated for writing it, and as always, my opinions are my own.