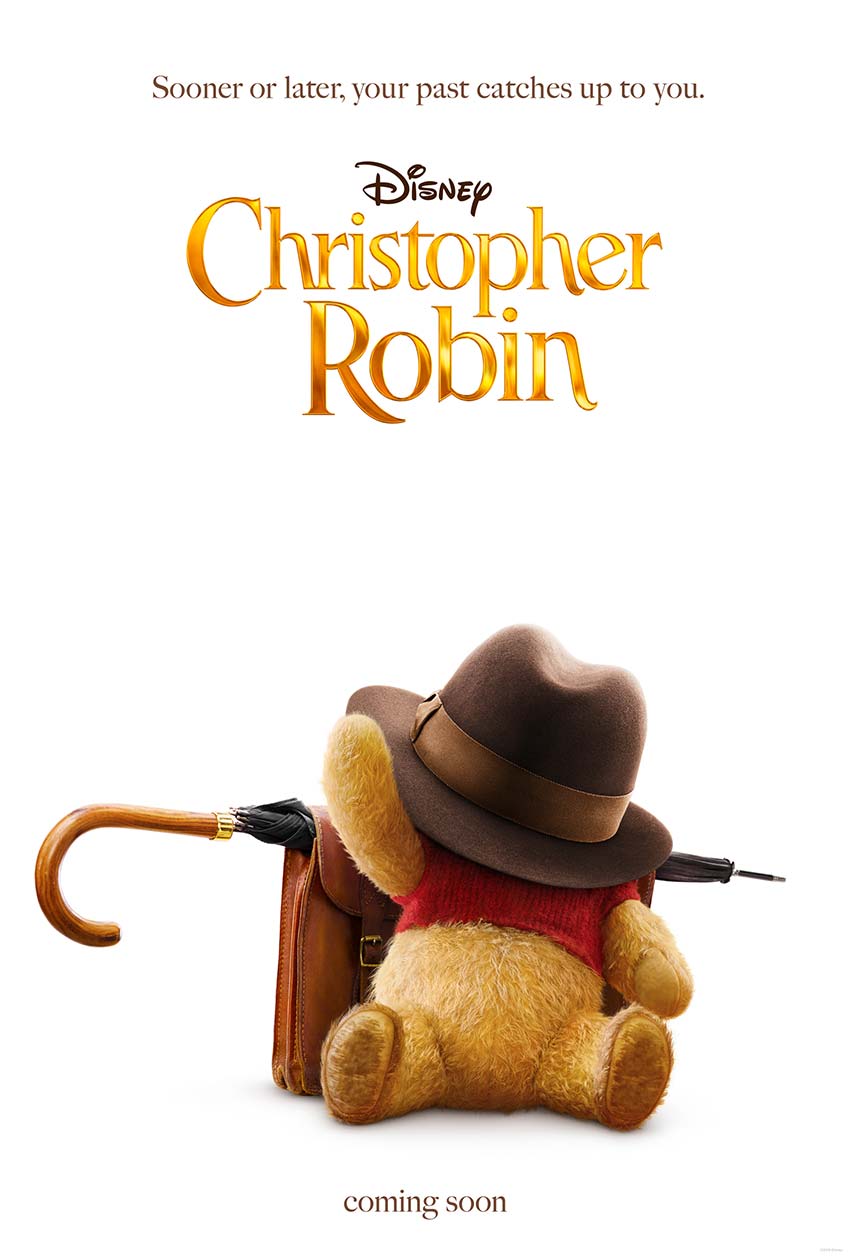 My kids are HUGE fans of Winnie the Pooh, so when we were invited to a pre-screening of Christopher Robin this week I  knew everyone would be all in. Everyone still gets emotional at the Tigger Movie, and after watching the trailer, I fully expected everyone to leave with their sinuses clear after being unable to hold back their tears.

It is never easy to let go of your toys from your childhood. I remember finding my daughter in full tears in her room one day. She had given up her dolls and realized suddenly that she wasn’t ready to not play with dolls.  She was going through a phase where she wanted to be more “mature” and playing with Barbie’s wasn’t indicative of her maturity.  She collected them all, and waited for weeks to give them to the one person she thought was worthy of her collection.  I asked her often if she was sure, because she was only eleven, but she was absolutely sure. I figured that the amount of time she spent without them while she was waiting to pass them on was proof that she really was over it. Months later, there she was… a teary eyed mess.

It was a brief meltdown, but we all have those moments when we realize we weren’t ready to grow up. Sometimes we live those lost moments of childhood through our kids. I was WAY too happy when Eden’s grandmother got her an Easy Bake for Christmas. Even though I know the soles of my feet might pay for their joy, I love hearing the sound of the bin of legos being dumped onto the floor, and the kids playing with them for hours. One day, if they let me, I’ll try to join them.

In the heartwarming live action adventure Disney’s “Christopher Robin,” the young boy who embarked on countless adventures in the Hundred Acre Wood with his band of spirited and lovable stuffed animals, has grown up and lost his way. Now it is up to his childhood friends to venture into our world and help Christopher Robin remember the loving and playful boy who is still inside.

Now grown up, Christopher Robin is stuck in a job where he is overworked, underpaid and facing an uncertain future. He has a family of his own, but his work has become his life, leaving little time for his wife and daughter. Christopher has all but forgotten his idyllic childhood spent with a simple-minded, honey-loving stuffed bear and his friends. But when he is reunited with Winnie the Pooh, now tattered and soiled from years of hugs and play, their friendship is rekindled, reminding Christopher of the endless days of childlike wonder and make believe that defined his youth, when doing nothing was considered the very best something. Following an unfortunate mishap with Christopher Robin’s briefcase, Pooh and the rest of the gang including Piglet, Eeyore and Tigger, step out of the forest and venture into London to return the crucial possessions…because best friends will always be there for you.

It was the perfect movie for adults to watch with kids. Grown ups get it – sometimes you work so hard you forget what… and who you are working for. Kids get it – your parents have to work, but sometimes you just miss them and wish they didn’t have to. The second “unfortunate mishap with Christopher Robin’s briefcase” almost took me out, and probably moved kids and adults alike. As kids (and adults) sometimes you think that if you could just do one thing right to please your parents, everything will be okay. What we don’t tend to grasp, until it is too late, is that there isn’t anything you can do to make parents love you any more or less. Sometimes just existing is enough.

I loved how the characters looked as close to the illustrations as I remembered. Not cartoon Pooh, but the Pooh from the books I had as a child. The mouth and eye movements were subtle, and it was easy to forget that stuffed animals really don’t talk. There are a lot of laugh out loud moments, and Pooh’s advice for life does not disappoint.

There was no violence or sex, just a closed mouth kiss and few tense moments. Nothing that kids these days couldn’t handle. Some of the emotional themes were complex, and might be difficult for a small child to understand, but I don’t think you would take a small kid to the movies for them to pick up the theme of this movie anyway. Of course, somebody’s parent had to die… because Disney. Other than that, I would say the PG was just a precaution just in case there were particularly sensitive kids that wanted to see it.

Bottom line, should you go see it?

I would definitely recommend that you see it. It can be in the theater or not, because there’s not a lot of special effects other than the talking stuffed animals. The scenery in the countryside is beautiful though, so if that is your thing, maybe see it on a big screen.

Absolutely. It is a charming movie, and it has just enough action not to make it a snoozer. The color scheme is not like your typical children’s movie with bright colors, so if you have a kid who needs that, it might not work for them. I liked the muted colors because it reminded me of the original books. You should definitely get the kids familiar with Pooh and friends before you go – not because you need to know the stories to enjoy the movie – just because.

The film stars Golden Globe winner Ewan McGregor (“Fargo”) as Christopher Robin; Golden Globe nominee Hayley Atwell (“Agent Carter”) as his wife Evelyn; Bronte Carmichael as his daughter Madeline; and Emmy® winner Mark Gatiss (“Sherlock”) as Giles Winslow, Robin’s boss. The film also features the voices of: Jim Cummings (“Winnie the Pooh”) as Winnie the Pooh and Tigger; three-time Emmy winner Brad Garrett (“Everybody Loves Raymond”) as Eeyore; Golden Globe nominee Toby Jones (“Harry Potter and the Chamber of Secrets”) as Owl; Nick Mohammed (“The Martian”) as Piglet; Oscar winner Peter Capaldi (“Dr. Who”) as Rabbit; and Oscar nominee Sophie Okonedo (“The Secret Life of Bees”) as Kanga. Disney has a history with the A.A. Milne characters dating back to 1966 when the studio released the animated short “Winnie the Pooh and the Honey Tree” featuring the character Christopher Robin, which was followed by the shorts “Winnie the Pooh and the Blustery Day” and “Winnie the Pooh and Tigger, Too,” as well as several full-length features and numerous direct-to-DVD titles. Disney’s “Christopher Robin” opens nationwide August 3, 2018

Disclaimer: I was given passes to the movie for myself and my family for the purpose of reviewing this film. The opinions are my own. We didn’t buy snacks or anything, but I’m pretty sure the little one had a granola bar in her pocket.

What do you miss most from your childhood?

Note – all of our articles are moving to this site effective August 30. If you want to see older articles until then, go to SocaMom.com/s/index.php/blog.