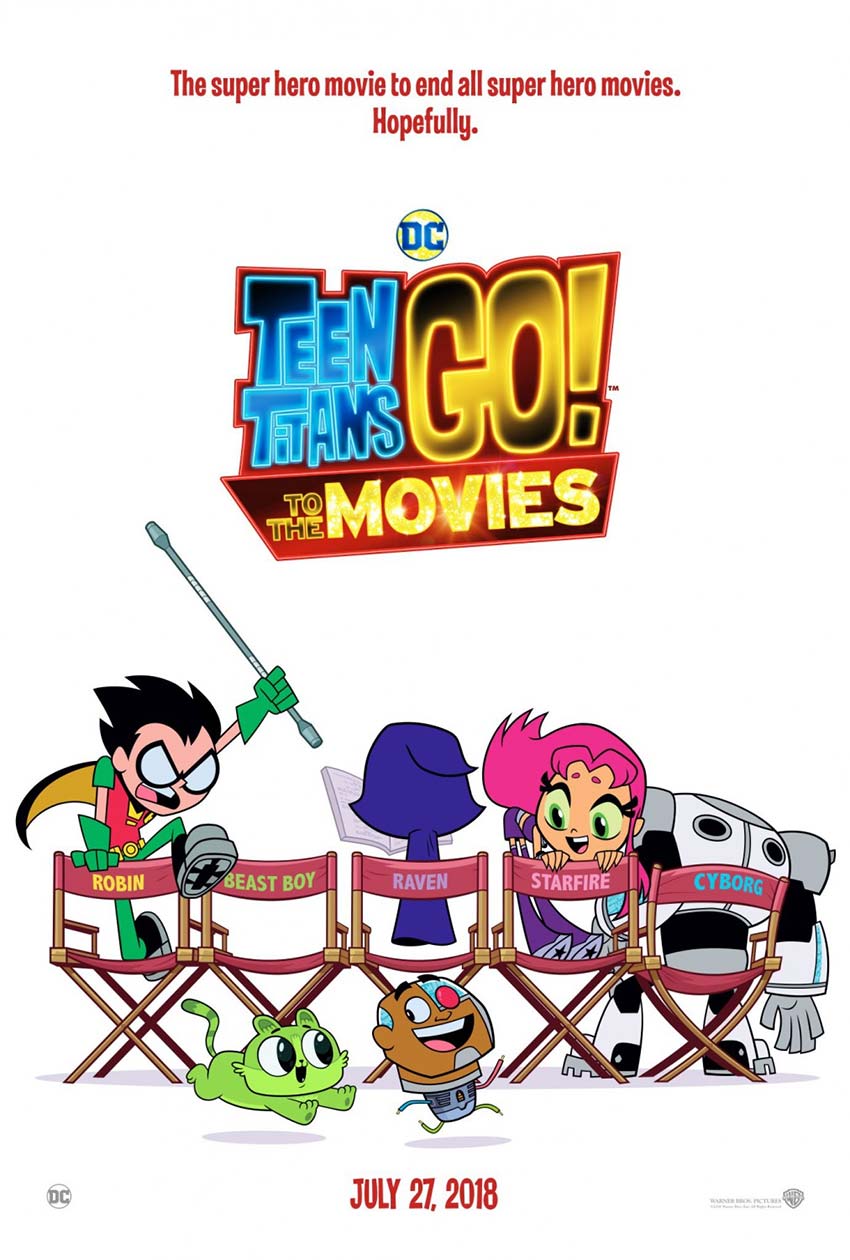 Disclaimer: I was given passes to Teen Titans Go to the Movies for myself and my family for the purpose of reviewing this film. The opinions are my own. We didn’t even buy snacks this time… cheaper to eat before you go.

Can you imagine what it is like to be born to be a sidekick? I had to really think about that a few days ago. If you have ever been support staff, you know that your skills are just as important as the person you are supporting, sometimes more so, and you have to have a lot more skills than they do. They may be amazing at one thing – one huge thing – but in order to support them, you have to be amazing at many things. Then one day you ask yourself, “WHY CAN’T I BE THE STAR OF THIS SHOW?”

That is the question that Robin has to answer for himself in this movie. True, this is a cartoon, but like most cartoons these days, they aren’t only made for kids – and the messages can be pretty deep.

If you watch Teen Titans Go on Cartoon Network, the lessons go much further than what you usually expect from a cartoon. The shows have tackled financial literacy, pyramid schemes, real estate investment and more – all in less than 15 minutes. So what would they do given over an hour? A lot.

When the Teen Titans go to the big screen, they go big! “Teen Titans GO! to the Movies” finds our egocentric, wildly satirical Super Heroes in their first feature film extravaganza—a fresh, gleefully clever, kid-appropriately crass and tongue-in-cheek play on the superhero genre, complete with musical numbers. It seems to the Teens that all the major superheroes out there are starring in their own movies—everyone but the Teen Titans, that is! But de facto leader Robin is determined to remedy the situation, and be seen as a star instead of a sidekick. If only they could get the hottest Hollywood film director to notice them. With a few madcap ideas and a song in their heart, the Teen Titans head to Tinsel Town, certain to pull off their dream. But when the group is radically misdirected by a seriously Super-Villain and his maniacal plan to take over the Earth, things really go awry. The team finds their friendship and their fighting spirit failing, putting the very fate of the Teen Titans themselves on the line!

Much like the Cartoon Network show, the sarcasm knows no limits, and the not so subtle digs at people (even people in other universes *wink*) are abundant. All of us went, my youngest is 12, and I could hear them laughing down the row. As you know if you read a lot of my reviews, staying awake is a challenge. Everybody was at this screening, so my family’s laughter, and that of the family behind me – along with the antics on the screen – kept me awake and alert.

The beginning is familiar – in more ways than one – and hilarious. There are little gems hidden in the movie for fans of the TV series that we appreciated. We have seen EVERY episode as a family, and my oldest is a big fan of the original series.

I won’t go through all the ins and outs of the movie or spoil it for you, but if you need details, my daughter did a live review with just a few teeny tiny spoilers. Pardon my coughing mid video. I was choking and trying not do die when I found a bottle of water in her room. As a mom of three, I knew that drinking or eating anything FOUND in a kid’s room could land me in the hospital, but how did I wanna go? Filming my daughter’s Facebook Live or some backwash related bacterial infection?  I couldn’t die on camera, not with my hair looking like it did at the time. I had to do it. The sound didn’t go out, she was trying to mouth the words “go ahead and drink it.”

Yes. There is a lot of crude humor. Depending on how conservative you are, you may want to note that there are maybe one or two references to being closeted. It is awkward, but not anything that would start a conversation with younger kids. The adults didn’t laugh during that moment, and neither did the kids in the theater, so the awkwardness was the break in the laughter because folks cackled pretty much the whole time. The younger kids probably didn’t get it, and the adults were likely looking at the kids to see if they caught it – they didn’t – hence the silence. The joke had layers, and then if the kids did have a question about that brief moment, a later scene could explain it away for them. HOWEVER, the very LAST line of the film could have you peppered with ALL the questions. If you aren’t ready to tackle the birds and the bees, maybe sit this one out.

See it? Yes. I enjoyed it and the kids had a blast. You don’t have to be familiar with the TV series, but it helps you get the full impact of why each scene or line is so funny. The music is so much fun, as usual, and kids and adults will sing along. You don’t HAVE to see it in the theater, but we enjoyed seeing it outside of the living room where we usually watch. It is about the movies, so being in a theater is nice.

I would take 10 and over if you are going to see it in the theater so that you get your money’s worth on the entertainment factor. The best part of the series is the sarcasm and jokes. Nothing was really dumbed down for really young kids, so if they aren’t going to get the jokes and just sit there and enjoy the bright colors and voices, they can do that on the iPad when it isn’t upwards of 8 bucks not including snacks – which younger kids will demand if you want them to sit for that long and watch a cartoon that they might not even understand.

I’ve always seen myself as the super skilled sidekick. I have a lot of talents, and I usually use them to support other people in the pursuit of their dreams – and that’s been okay. I love supporting my friends and seeing them shine. But that doesn’t mean that I can’t shine too. Sometimes backup singers and songwriters become legendary stars in their own right. Teen Titans Go always has a good message if you look for it. My take aways were – go for what you believe you deserve, don’t take no for an answer, sidekicks can be stars too, and never let anyone watch you enter your password.

Disclaimer: I was given passes to the movie for myself and my family for the purpose of reviewing this film. The opinions are my own. We didn’t even buy snacks this time… cheaper to eat before you go.

Have you ever felt like a sidekick? What did you do to prove that you were a star?