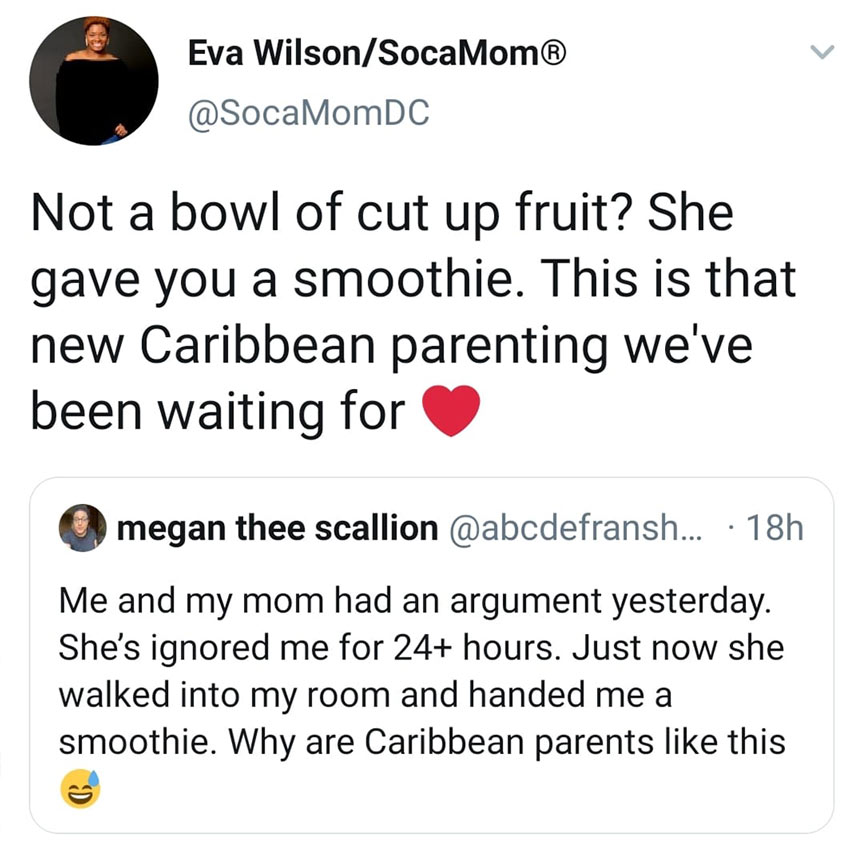 The last person I want to become, as far as apologies go, is my mother. But you are a product of your environment, no? My first instinct is to offer food or tea when I know that maybe I was a little to sharp-tongued with the kids. A sincere apology isn’t my go-to. I have gotten better about it, and it works – kids are REALLY forgiving. They just want to hear you say it. How do I know?

I know that if my mother apologized, I’d speak to her again. I know that she never will, so our relationship is essentially over. It is hard to wrap my head around it sometimes, but most days are good. For the sake of my family, I just have to make sure I don’t become her, but it is easier said than done.

Related: Caribbean Parenting Among the Weeds

I gave 4 choices for what apologies from Caribbean parents might look like if they weren’t verbal – offering tea, cut up fruit, some other food item, or no apology of any type.

Many said their parents were just silent until they thought it blew over. When I was a kid, apologies looked like food or shoes. As an adult, the apology didn’t look like anything at all. Once I realized how much it hurt me to just “live with it because she’s old,” I decided that I wasn’t going to do it. I gave her the choice – either acknowledge the terrible things she did to me (at least acknowledge my feelings) or never speak to me again. She chose the latter.

Honestly, fruit would have been nice.

I don’t want to ever get to that point with my children. But let’s be real – nobody wants to admit they are wrong. However, to move on – we do. Or we offer tea. Some gesture to say that we want things to get back to normal. In my experience, nothing has gotten things back to normal faster than a good, thorough, heartfelt apology.

I know that it is possible to be better at this. My dad managed to do it. Acknowledging where he went wrong in situations is sort of his thing. He’s been apologizing for the last spanking I got for decades. I really don’t think he believes I’m over it. I am. But just knowing that he is sorry fills all sorts of holes in my heart.

So, I practice apologizing to the kids. It is a muscle that I have to build – a skill that I have to develop. So far, so good. I definitely am committed to working on it while they are young, so I don’t lose them when they are grown, and have become the amazing people that I am trying my best to raise them to be. I don’t want to miss out on a single moment of that, just because I can’t admit my wrongs. I’m not perfect, and my kids don’t expect me to be. They know my flaws, and I readily admit them. So when I find that I am wrong (or rude), I take a deep breath.

I don’t want to watch them live their best lives from afar because I can’t admit simple, and not so simple, mistakes. I want to be going on vacations with them, and jumping up on a boat ride with them arm in arm – until my knees can’t take it anymore. That’s how I see myself growing old.